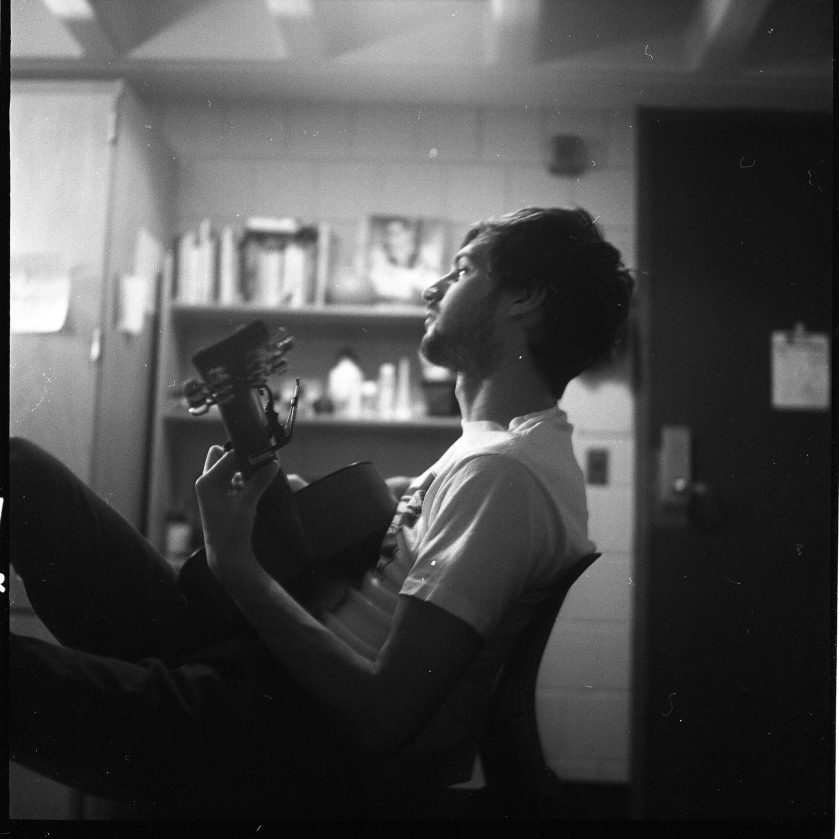 SUCKER: Who is Lucent Dreams?

LUCENT DREAMS: Lucent Dreams is me, Caleb, and a few of my friends taking my songs and giving them life. It’s the latest incarnation of a lifelong pursuit of making songs that I would want to listen to in my car.

SUCKER: Is there an implied narrative within the song order on The Honest EP? How does this relate to the overarching theme of honesty?

LUCENT DREAMS: There is not really an implied narrative regarding the song ordering. I was mostly ordering them to reconcile the fact that none of the songs really sound like they should come from the same person or be on the same album. Thats the honest answer! Honesty, or the illusion thereof, is important in art but its different from telling the truth. You can manufacture honesty in music. The EP is honest in the sort of way a drunk phone call to an ex girlfriend is, its just kind of all on the table, vulnerable. I rarely checked myself or listened to the voice in the back of my head saying, “You can’t talk about sex and death on the same album!” or “You can’t just have drums on all the songs and then tap on your acoustic guitar for the intro, and why do you INSIST on ACOUSTIC GUITAR!!!!!?” I just kind of did things the way I did because all of these disparate styles, approaches, and sounds exist within me and I didn’t want to build this album based on what would make someone else comfortable.

SUCKER: What was your first experience with music? How has your process grown since?

LUCENT DREAMS: I used to learn a lot of songs on guitar, I took lessons, I got pretty good at finger picking. But I really wanted to sing, probably because I was so bad at it. I really liked writing. Anything. Stories, song lyrics, research papers, poetry, raps(lol), long winded AIM messages… I figured if I started putting guitar behind my lyrics eventually the singing would get better and I could share my passion for writing AND music. I started getting serious about writing music and performing when I was 17 or so. My process was very much: write the chords, write the words as they come, and then play it to people. You could argue that my process is the same now but now I understand it better. I still write the instrumental first and lyrics later, but I have a better understanding of what I want to say and how it will come across over the bed of music.

SUCKER: Is it difficult sharing the creative process on a project to personal to you?

I write the songs by myself. Acoustic guitar, mechanical pencil, paper. Same way every time. Rarely on that end am I willing to compromise.

The other side is when I bring my songs to my band, I rarely give any direction and if I do its the feel I’m going for. The band writes their parts, and I pretty much never touch them.

SUCKER: What is your favorite aspect of songwriting?

LUCENT DREAMS: Writing lyrics. I tend to write in a fairly stream of consciousness way, and sometimes it takes me weeks to understand what the hell I just wrote and what it means. A lot of it is very metaphorical and it takes a lot of examining the context of when I wrote it to understand what my subconscious mind was trying to say. The feeling of finally understanding and being able to explain each line is always a sort of eureka moment where you realize like “Hey, there is a lot going on here.”

SUCKER: Because you were involved in all the creative and productive aspects of the project, is it difficult separating the two processes?

LUCENT DREAMS: Yes. Especially this album. I record while I write, often by the time the band hears my idea its already final takes of guitar and vocals. Like I said before the album is a hodgepodge of styles so when I look at it as a mixing engineer, my training says level it out. Make the mixes be the thing that ties it together. I found myself turning down the distortion on Planting Season because it was the only lo-fi song and it stuck out. Then I realized thats took away from the song. Each song is like a child, they want different things. You can’t just try to force your kids to all play baseball so they fit in when Ronnie wants to smoke pot and Jimbo wants to be a dancer.

SUCKER: How should the audience feel when listening to this EP?

For me, spaces and places play a pivotal role in the creative process. Does your process/artistic style vary between (rural?) Vermont and urban New York?

My sound changed a lot when I hit New York. In Vermont, theres really two big scenes. There’s jammy funk stoner stuff everywhere and bluegrass. I was making weird electronic indie stuff for a while and then weird folk music and it was all very private, people here don’t really like that. Then I got to Purchase and was like… wait people here are playing the music I like to listen to and other people like it too. I felt less pressured to be accepted and felt confident in my process and sounds because New Yorkers get a great cultural education. In Vermont, there is Vermont culture. Maple Creemees, craft IPA’s, Phish, Bernie, and weed. New Yorkers have been exposed to all sorts of art and there are tons of scenes and tons of people. I can’t even walk to anywhere from my childhood house in Vermont. The closest venue is a restaurant that has bluegrass some nights. I will always love Vermont, the people in it, and the nature. I will continue to speak with an accent and write about swimming holes, firewood, and gardening in my songs. That won’t ever change.

SUCKER: Can you speak on the visual choices used on The Honest EP?

LUCENT DREAMS: I said I was looking for some work on my Facebook which is full of amazing artists, because of Purchase, and I got a good response. I was going through peoples Instagram pages to see which style would best fit my music. I was going to commission something but then I saw a piece that I absolutely fell in love with by Casey McCarthy. I wanted it so bad. The muted colors, the dreaminess of it, the obfuscation. I contacted them and they generously said I could use it! As to the choices regarding the creation of it that’s best left to Casey. I’ll link their Insta at the end of this interview.

SUCKER: How has being exposed to all the different creative energies at SUNY Purchase College influenced your progression within your music?

LUCENT DREAMS: Purchase is so sick. Being surrounded by artists that are so motivated and do not compromise is extremely inspiring. It’s such a safe place to pursue art in your own way. It’s a daily dose of greatness. You’re surrounded. I imagine it would be intimidating for some people but when I got here I was like “this is my place, start writing NOW.” Plus you see people doing what they want and succeeding at it. I never felt that in any other music program at any other school.

SUCKER: Do you consider yourself more of a recording or a performing artist?

LUCENT DREAMS: I do a lot more recording these days although I’m planning on playing a lot more shows around the city when the album comes out.

SUCKER: If The Honest EP came with “exercises for listening”, what would that entail?

LUCENT DREAMS: What a great question. Treat each song as a vignette, a little story, without context. Listen like you were looking at a painting as someone who doesn’t know the first thing about painting and doesn’t need to extract meaning from the work. Then take a pass figuring out what it means to you. Then try to figure out what it means to the artist.

SUCKER: Who are you hoping to reach with your music?

LUCENT DREAMS: People who are into it. If it’s what you like, listen to it and support the artist! If you don’t like it that’s fine, I don’t dislike you for it. Like I’m pretty sure my mom won’t be listening to Planting Season in her car more than once. If my Gramma was still around she wouldn’t want to hear me swearing in my lyrics. I’m pretty sure none of the people I’ve ever dated listened to my music on their own time. You can’t force people to change their tastes. I want to reach people that like my music and gain some sort of pleasure from it, the way so many other artists have given me pleasure, courage, and stimulation.

SUCKER: Because your music is ultimately meant to be shared, does that influence your creative/songwriting process?

LUCENT DREAMS: Yes, I can’t help it. I want people to like my music and get something from it. I still write whatever the hell I feel like though. Its more of a subconscious effect on the songwriting end. It’s more measurable on the technical side, mixing and recording. You just can’t put out something that sounds like it was recorded over-saturated to tape and expect to gain much more than a small cult following. It still happens but people expect to hear the kick drum on a rock song.

SUCKER: What is your relationship with social media, and do you feel it is important as an artist in the 21st century to utilize it?

LUCENT DREAMS: I’m a social media fiend. I grew up on AIM and Myspace. I think it’s so important and beneficial to artists to utilize it if they want to reach people. I think that people who play obscure and don’t utilize it are expecting things to work out for them the way that lo-fi did for The Mountain Goats. John Darnielle has 1000s of songs. He got struck by lightning. You aren’t going to. If you desire exposure and reaching people you need to use all of the tools. Technology is evolving humanity and without it we just aren’t enough anymore. I believe that on a practical level, spiritually its problematic.

SUCKER: Where can we listen, buy and follow your music for future updates?

LUCENT DREAMS: The album will be available on Bandcamp and all the streaming services. Follow me on Facebook and Insta. You can add my personal page as well if you want. Also follow Casey McCarthy’s art page on Instagram! Thanks!